Once Upon a Time in Cuba Book 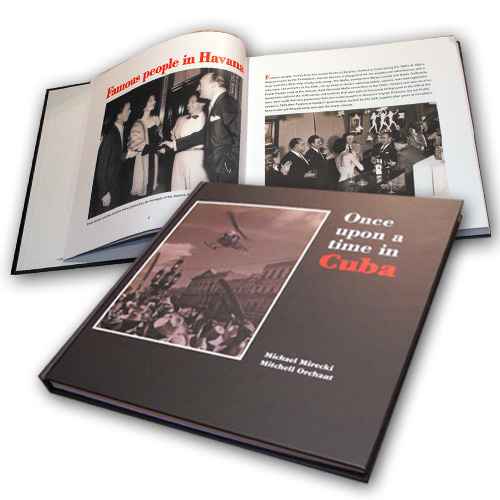 "Once Upon a Time in Cuba" - by Michael Mirecki and Mitchell Orchantis...read more

"Once Upon a Time in Cuba" - by Michael Mirecki and Mitchell Orchantis a 147 page compilation of our original photograph collection of Cuba.

Only 1000 individually numbered hard back coffee table books will be made available.

Photo Book Once Upon a Time in Cuba

Once upon a time in Cuba took me on a nostalgic journey to an imagined time in Cuba. While some friends have witnessed Cuba in some of its phases, I have not. These photos tell a vivid story about Cuba over a century.

Michael and Mitchell are ideal candidates for putting together a photo book about Cuba. Having spent years in Cuba while doing photography, Michael knows the country. Mitchell is one of the most selective collectors who visits Cuba throughout the year, which he has done for many years.

The collaboration worked out.

Immediately upon opening the book I saw Frank Sinatra and Ava Gardner in the familiar and classic lobby of the Hotel Nacional. Who better to bring you back to the heyday of 1951 in Havana than a young Frank Sinatra - before he was "Old Blue Eyes."

The pages continue with Papa Hemingway, the Duke of Windsor, Gary Cooper, and Winston Churchill among others. Seeing these celebrities in Cuba makes me want a cigar, a daiquiri and to get them to tell stories. That is the power of these photographs. They bring the feeling of old Havana to the viewer.

Emotion takes a sharp shift when you see President Fulgencio Batista raising his glass at the Presidential Palace. Batista represents many things. Among those is the coming of the Cuban Revolution and the modern period of Cuban History.

Aptly, the next chapter is the "Cuban Revolution." Images of Fidel Castro, Che Guevara, Raul Castro and Camilo Cienfuegos fill the pages with rough military uniforms and grizzled beards. The images speak for themselves. Fidel is seen here in his most notable role as speechmaker with thousands in audience.

The revolutionaries fish, strategize, smoke cigars, hike and even play table tennis. Each image screams. Even the most trivial activity in the 1960s is cloaked in the drama of the revolution. Because we know what happened over the next fifty years, the images gain that much more power. But perhaps the most dramatic revolutionary photos feature unknown Cubans caught up in the revolution; running in the streets or sitting on a streetlamp listening to Fidel.

After the drama of the revolutionary photos comes a rather more serene and elegant picture of Cuba. This was the period before the Revolution. In fact, the rest of the book features images that are far less political.

Gambling Salons in the finest hotels of the time are thankfully captured on film here. Cuba was known as an island for vice. Whether it was gambling, women, drink or other pleasures, Cuba had it. And hundreds of thousands of tourists visited the island for a taste of Caribbean Good Life.

I cannot describe every image in the book, you will have to see it for yourself, but I want to make a few observations.

Cuba benefitted from massive investments and commercial successes in the period of the Revolution. This can be seen in images of steam locamotives, the new Hilton Hotel in Havana, elaborate parties, and scores of thousands of successful businesses. Perhaps this is one of the unspoken themes of this book.

Another theme, albeit tied to the commercial successes, is the pride of the Cuban people. Throughout the book, I see people in all walks of life with tremendous pride for what they do and what they have accomplished. It may be seen on the faces of the guajiros in the countryside, the musicians, the beautiful women, or the soldiers. I can think of very little that is as attractive as this expression.

No matter what you are attracted to, this book is worth looking at. It features many sides of Cuban life over a tremendous stretch of years. But perhaps the most notable element of this collection is its ability to inspire emotion in all readers with a connection to Cuba.