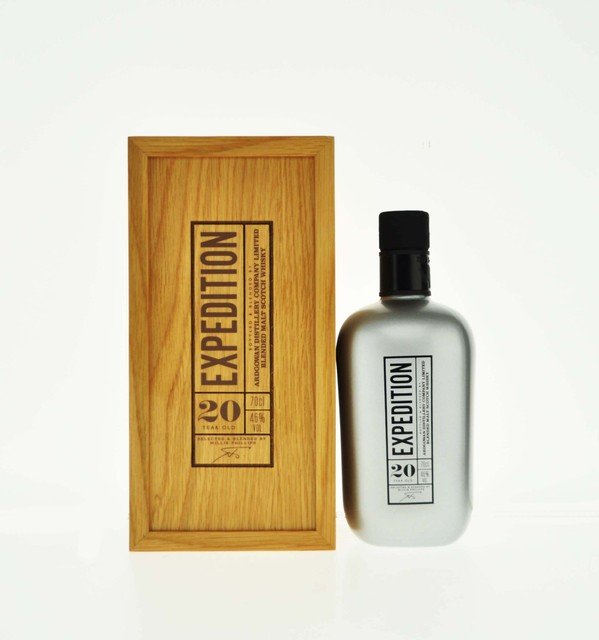 Colour
Antique brass
Nose
Initially pink peppercorns and raspberries with cream and honey. Icing sugar
combined with hints of saw dust and tree bark. Then dried pink grapefruit peels and zesty blood oranges. Crème brûlée and freshly ground coffee beans appear later.
Palate
A pop of citrus, peppery spice and honeyed sweetness comes first. Followed
by a hint of beeswax on old furniture. Then more citrus fruits with honeysuckle
and freshly cut flowers. Very well balanced with a luxuriously unctuous and coating mouthfeel.
Finish
A very long finish that truly lingers with a brilliant balance of citrus, spice and
sweetness.
Overall
A delicious and very well balanced whisky with wonderful layers of citrus, spice and sweetness. A fantastic mouthfeel that will have you chewing and savouring each drop. An incredibly long and nuanced finish will have you coming back for more.

Ardgowan Expedition is the inaugural release by the Ardgowan Distillery, an exciting new venture with ambitious plans to bring distilling to Inverkip. Limited to a run of 600 bottles, each bottle is individually numbered and contains whisky which has travelled to the South Pole and back, Carried by explorer Robert Swan OBE and his son Barney on their South Pole Energy Challenge. Each bottle signifies one of the 600 miles walked to the South Pole. Further details about the expedition can be found on Ardgowan’s website.

The 20-year-old premium blended malt has been specially selected by Ardgowan Chairman and former Macallan Managing Director Willie Phillips; it includes classic single casks from upper Speyside and the northern Highlands. Expedition is rich and mature with hints of cacao, cedarwood and dark fruits. According to Willie Phillips, the aim of Expedition was to create a whisky as he envisioned a 20 year old Ardgowan release to be like in the future; it is in effect a test-run for the future Ardgowan flavour profile.

WHY THIS WHISKY WENT TO THE SOUTH POLE AND BACK

In early 2016, polar explorer Robert Swan and his son Barney were planning a trip to the South Pole which would only use renewable energy.

Their project, the South Pole Energy Challenge, was developed to show the world it would be possible to travel and survive in the most inhospitable place on the planet, without the need to use any of the Earth’s resources on the way.

One of the challenges during the trek would be to produce drinking water for the team – something usually done using aviation fuel to melt snow. Robert was keen to find a simple, robust and zero-carbon way to do this – and so he called on his friends at Ardgowan Distillery to help.

Why a distillery, you may ask? Well, prior to getting involved in making whisky, the founder members of the distillery team had been involved in renewable energy, working in wind, wave, hydro and solar projects. Robert knew we would love a challenge. So, in the spring of 2016 he asked us to develop a zero-carbon snow melter that would be lightweight, robust and inexpensive.

After some creative thinking, and a few sketched designs, we bought some stainless-steel vacuum flasks, argon gas, clear plastic polycarbonate tubing, matt black paint and some glue – and the Ardgowan “snow melter” was born.

The idea was simplicity itself. The sun’s rays would pass through the plastic and heat up the matt black flask, whilst the argon gas would act as an insulator to stop the melted water refreezing. All the polar explorers would need to do was fill each flask with snow, screw on the lid and leave it on top of the sled for the day.

We sent our prototype to the Southern Hemisphere, and in late 2016 Robert and the team put their melter to the test at their Union Glacier field base. The super-simple, low-cost kit worked just as intended, and Robert asked for four expedition-ready snow melters: one for each member of the South Pole team.

To share in Robert’s historic trek, we asked him to take a bottle of very special aged single malt to the South Pole – which now forms part of the Ardgowan Expedition commemorative blend of malts. We also gave them a small sample with which they could toast their epic trip!

...and the rest is history.

On 15 January 2018, Robert Swan’s team and son Barney reached the geographic South Pole, Robert himself having had to pull out 300 miles into the journey in need of a hip replacement. Their mission to conduct a polar expedition entirely on renewable energy was an extraordinary success – and the Ardgowan snow melters played their own part in keeping the explorers well-watered every step of the way.

Together with Robert and Barney, we have shown the world that we can all live off renewable energy, and that the outlook for the future of this planet is brighter than ever; Robert and Barney continue to campaign globally to help drive change in the way we use energy.

This father and son have been an inspiration to us at Ardgowan Distillery. Once complete, our new distillery will employ the latest techniques to minimise water usage and help deliver a more sustainable whisky industry.

That is something we can all raise a glass to.

The Ardgowan Distillery Company plans to have an £12 million state-of-the-art distillery in full production in 2020. Situated in Inverkip, Ardgowan Distillery will be fitted with two-pot stills, six wash-backs and designed to re-use as much of its own production energy as possible. Up to 21 jobs are hoped to be created through the project.

Ardgowan’s intention is to create a maritime-influenced Lowland Single Malt Scotch Whisky in three different style – Heavily peated, lightly peated and unpeated, to be released as single elements and blended together.