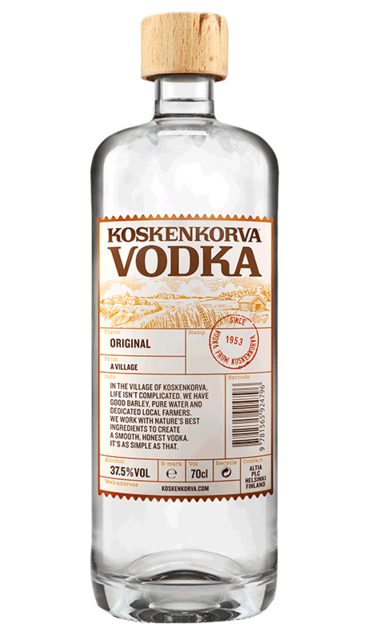 Made in the village of Koskenkorva, Finland, this is a refreshingly straightforward vodka made with locally sourced barley and exceptionally pure unfiltered...read more

Made in the village of Koskenkorva, Finland, this is a refreshingly straightforward vodka made with locally sourced barley and exceptionally pure unfiltered spring water.

The people of the Finnish village of Koskenkorva have been doing things differently since 1953.

Inspired by Scandinavian cultural and foraging traditions, Koskenkorva’s collection of original and flavoured vodkas are craft distilled with the essence of this Finnish village’s surrounding landscapes.

Traditional locally sourced ingredients including glacier water and barley from the distillery’s own fields, are coupled with a state-of-the-art continual distillation process which sees Koskenkorva’s spirits distilled over an impressive 250 times. The result is a sustainably-produced, environmentally sound and exceedingly pure vodka.

We admire the Koskenkorva approach – a refreshingly straightforward and sustainable ethos to spirit-making.
THE PRODUCER

The Koskenkorva distillery is overseen by Finland’s state-owned drinks company Altia and provides employment for villagers, whilst supporting the region’s longstanding farming heritage.

For Koskenkorva and Altia, sustainability is a way of life, and the recycling and reutilisation rate at the distillery is an impressive 99.9%.

Adhering to the principles of a ‘circular economy’, by-products from the Koskenkorva distillery also produce starches for animal feed, whilst all the carbon dioxide generated in production is reused for greenhouse cultivation.

Leftover grains are used in an internal energy plant, where the resulting ashes are used to fertilise the fields surrounding the village.