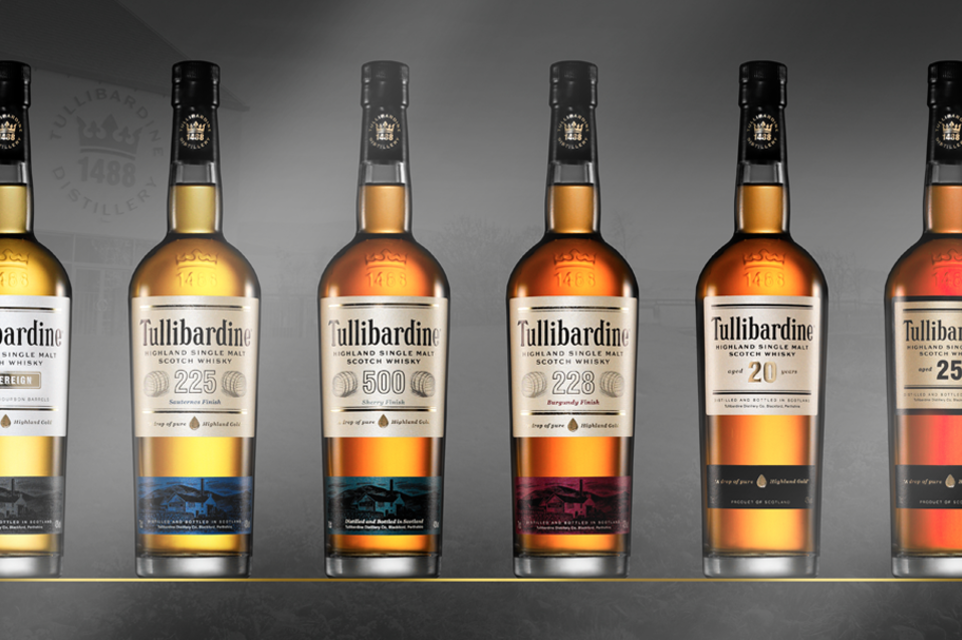 A drop of pure Gold

A distillery relatively unknown until fairly recently, Tullibardine, once producing spirit almost exclusively destined for blending, now has an extensive range of official bottlings which we have in-store and online at Robert Graham.  It consists of, firstly an entry-level whisky, moving onto a solid trio of finishes, fantastic age statement bottlings and more recently the introduction of The Marquess Collection.

Although officially founded in 1949, which is relatively young for a Scottish distillery, the site has a rich history in alcohol production.  Besides a couple of separate attempts at distilling by the Bannerman family, a brewery has been on the site for some time-- Tullibardine’s claim to fame is that a certain James IV of Scotland popped in for a cask of celebratory post-coronation ale in 1488.

Before the change in production from having been used primarily in blends, the spirit has taken on a decidedly different flavour.  Previously and famously nutty, the new spirit has a much more delicate and floral driven flavour.

The signature whisky is light-bodied and easy to drink.  Matured in first fill ex-bourbon barrels it has delicate notes of sweetness with soft vanilla and barley sugars.

The decision to base the names of the following whiskies on numbers refers to the volume of the types of casks in which the whisky was finished.  In this instance a French dessert wine from the Sauternes region.  As expected, a considerably richer whisky with a lovely thick mouthfeel.  Tropical fruits are balanced with citrus in this approachable but complex dram.

The big 500 litre sherry butt made from Spanish oak brings a darker, more intense colour.  Toffee and fudge notes accompany warm nuts and raisins with a rich Christmas spice on the finish.

From Tullibardine’s Marquess Collection, The Murray is a collection of limited edition releases including special finishes including Marsala and Chateauneuf-du-pape.  There are also releases exclusively matured only in first-fill bourbon barrels and bottled at cask strength, which brings intensity and a beautiful freshness to the spirit.

The 25 year old, on the other hand is made using only spirit occupied an ex-sherry hogshead, which results in a considerably richer whisky. Cinder toffee, chocolate orange, warm Christmas spice.

Trying not to sound too corny, whatever your taste or price range-- there’s a Tullibardine out there for you!