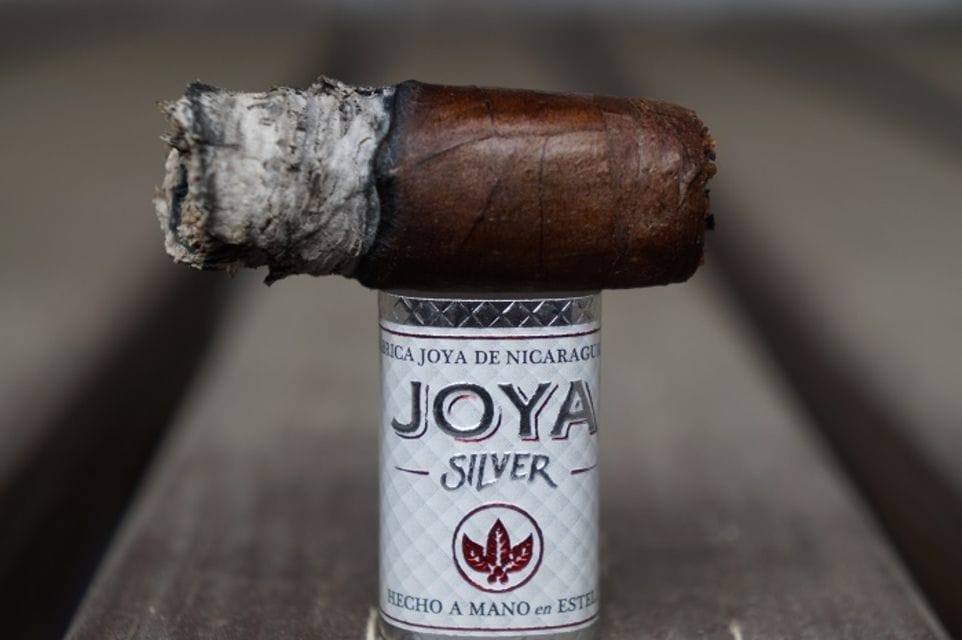 This year sees Nicaragua’s oldest brand of cigars turn 50. The Joya De Nicaragua company has been making these beautifully crafted cigars from their headquarters in Estelí for half a century now and to celebrate this, several great cigars have been released.

One of which is the Joya Silver, to follow on from the Joya Red which was released in 2014 and the Joya Black in 2016.

So, Today I have the pleasure of telling you about the Joya silver  Toro and my thoughts on this new edition...

Now I’m not sure if the folks at Joya De Nicaragua know me, but they have surely treated me on this stick, as it has my favourite Oscuro wrapper around it. I have mentioned these wrappers in a previous Journal entry, which you can find here.

I have chosen to go with my trusty Xikar V-cutter and cut the cap 'left-to-right', as the Silver Toro is a reasonably rectangular box pressed cigar...

My pre-light draw gets some lovely flavours, a cross between freshly ground coffee and almost a mossy wood taste. Not to far off from what a forest floor would taste like and please note - I haven’t tried this!! (Well, not since my time as a toddler anyway...).

Lighting the cigar and taking my first draw is a perfect experience from the outset - a wonderful taste which reminds me of that very first cup of coffee of the day, nice deep black coffee, the kind you can stand your spoon in. As I smoke my way down, I’ve picked up notes of charred wood and black pepper. There is an aroma in the air that I have been trying to put my finger on - after a period of contemplation (and almost disbelief) I think I have it - it’s beef, nice thick smells of meatiness, or to describe it in another way to make you chuckle…the steam off a lovely hot cup of Bovril, and damn it’s a nice smell!

As I’m going into the second third, I have noticed that the V cut that I have used has made the draw slightly resistant - not in a bad way as it’s making the smoke last longer.. Great ash colour as well as a cool smoke and a very even burn. The meatiness is now going and is being replaced by mixed spices and a nice cocoa and cinder toffee has come through with what I think is cherry as well.

I can only describe this final third as amazing, the favours I am getting makes me feel like I’m not smoking a cigar anymore but eating cake. Not any kind of cake at that, Guinness cake I’d say. The meatiness came back but wasn’t quite like the first third it was more stout and with the cocoa still there, I thought to myself “no you can’t write that, that’s going to far”. Then I remembered when first started tasting cigars and whisky, a good friend of mine said the tastes you get will trigger a memory and then it’s a case of not say what you see as the quote goes but say what you taste. And there you have it Guinness cake, rich cocoa and stout.

My thoughts on this cigar are that it’s packed full of favour from start to finish. Almost the best bits of the Joya red and the Joya Black combined I’d say. One I’d love to smoke again and certainly one I’d recommend you try as well.

(In hindsight, I wonder if Nigella Lawson would like this food-laden review...?!)

That wraps it up for this Journal entry, hope you have enjoyed it and said to yourself "Right, I need to try these for myself!!" - If you find yourself in our Cambridge store and smoking a Joya silver, please let me know your thoughts!!