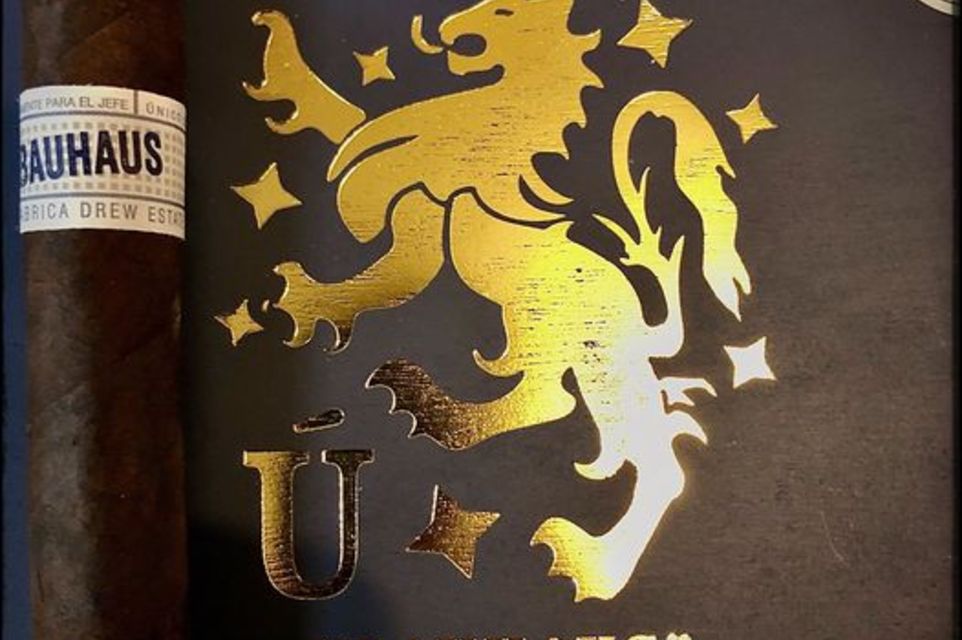 Hello ladies and gentlemen, cigar and whisky lovers and welcome to another one of my cigar reviews. A time for you to sit back and have a quick read while smoking a cigar and have a glass of something nice in your hand.

So today I take you all back to Drew Estate, while I sample and talk about a cigar that is exclusive to the European market. So, for those of you who see a cigar in the States and think damn I wish I can try that, this is your one up with this cigar.

That cigar being the Liga Privada “Bauhaus” from the Unico Serie, which you may have tried others from this collection such as the L40 or the Dirty Rat. Why the name “Bauhaus”? well this is in reference to the Bauhaus school of design, which was a post-World War I German-based school that tried to use modern design principles to create architecture and design. Which is very fitting with what Jonathan Drew and his team set out to achieve with every cigar they bring out. So not only am I a personal fan of Drew Estate cigars but the finest of details that goes into the picking of the leaves but the design work and that gap in the market the guys at Drew seems to nail every time.  Enough of my fan boy excitement for this great cigar company and let’s move onto the cigar its self.

The Liga Privade Bauhaus is a 4 ½ inch in length and a 50 ring gauge, a Short Robusto making this for folks who are interested a Rothchild Vitola. The components within this cigar are a filler of Nicaraguan and Honduras, holding them all together is a binder from Brazil and for that final touch the beautifully dark brown almost black Connecticut Broadleaf wrapper which gives the cigar a divine luster /shine that makes it stand out in any humidor and would look great in yours. 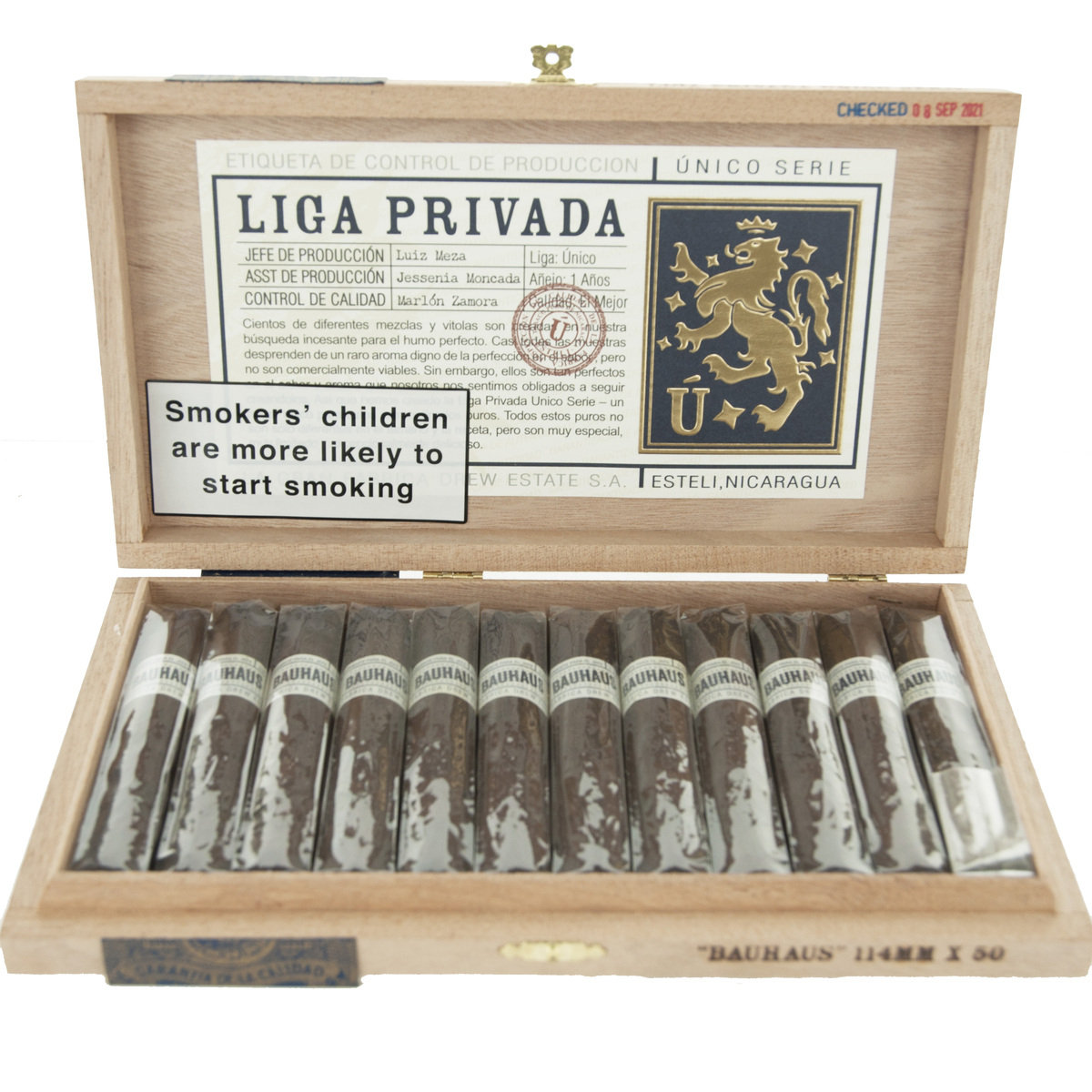 On the dry draw before lighting, a rich oaky taste comes through with a note in the nose that makes me think of that great wood smell you have when walking through a distillery warehouse. After which the slightly sweet taste of reminds me personally of Tawny Port.

After lighting the Bauhaus, straight away is that attractive, majestic pale blue smoke that billows from the tip of the cigar. It is almost hypnotic watching it dance upwards which I’m always taken away by with any Liga Privada or Undercrown. Getting into the cigar has a creamy nutty taste and a smell of a bowl of salted peanuts and on a piggy back on that my taste buds then pick up (and bear with me on this) Fever tree Mediterranean Tonic, that mineral light freshness of herbs.

Going into the second third that mineral note stays and the classic cocoa that you find in a Liga Privada is there but I’d say not quite the same as others I have had like the T52 or the Dirty Rat, this is more of a deep dark chocolate but with twang of sugar? Maybe vanilla? It’s a flitting presence that I can’t quite put my finger on. Then there comes a peppery note (yes a classic palate note) but with the combination of the still lasting creaminess from the first third, reminds me of a very light pepper sauce. Now if you have ever come in and brought a Drew Estate cigar from me in store, I always refer Undercrowns and Liga Privadas are like a three-course meal with all the sweet and savoury notes that run over your plate. The Drew estate team in my personal opinion are the Willy Wonka’s of the cigars and those cigars being their everlasting gobstopper “the Snozzberries taste like Snozzberries”

After a very pleasant even burn and continuous draw I come to the final third, here is where I have found the return of some of the notes that were there on my dry draw a mix of spices and Oak wood with a tangy maybe even sour sweetness of red berries, once again bringing me to that Tawny port. Now I have smoked this in the afternoon but my next will most certainly be after dinner as it’s everything I would enjoy after dinner with the flavour profile. Certainly a medium flavour at the start of the cigar and works its way up to full as you go along and the strength of the Bauhaus does the same, but gently so you don’t really notice it’s happened. 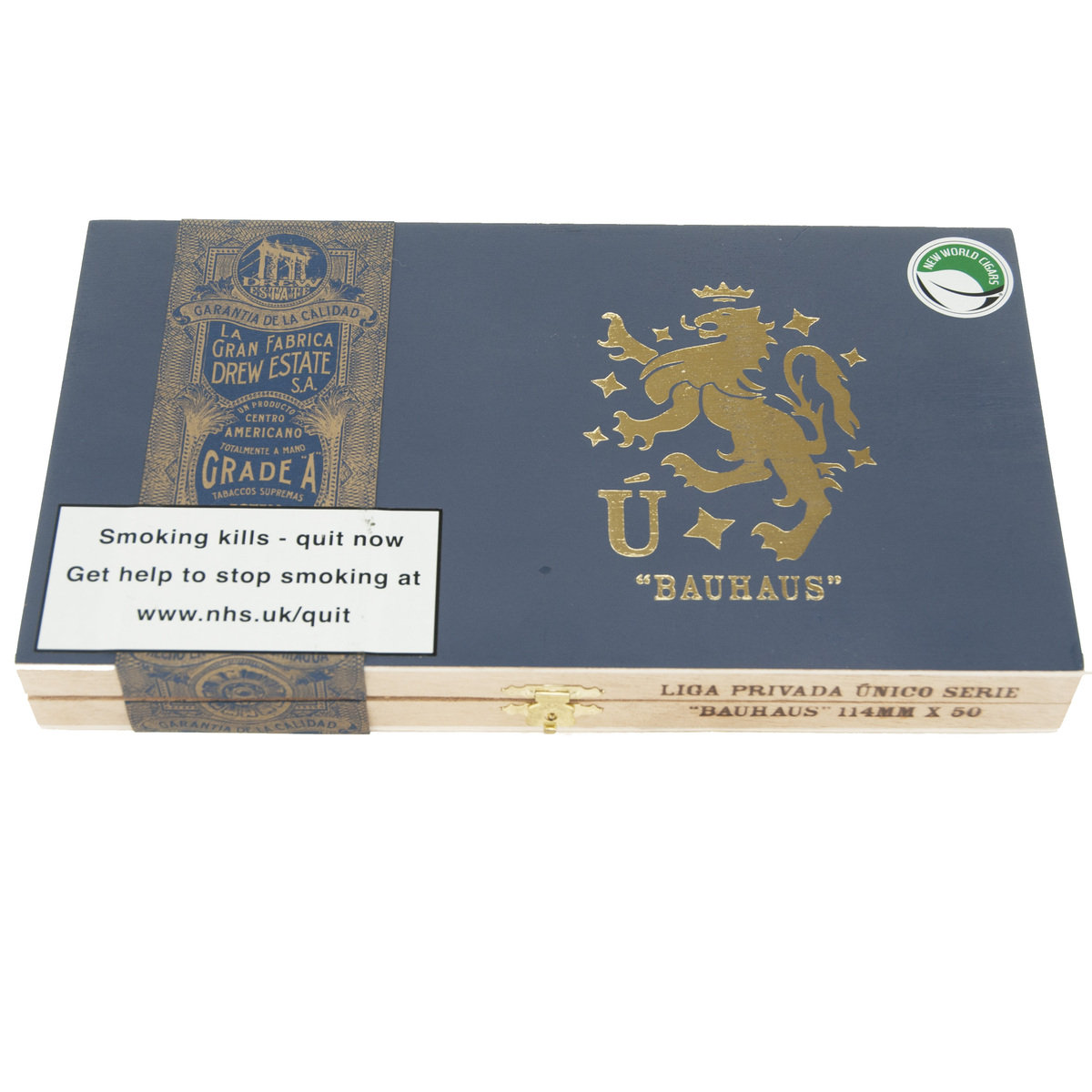 My smoke time on this has been 57 minutes but that’s taking in to consideration the notes I have written down. So I’d put the Bauhaus at a good 40 minute to an hour smoke. It has been a smashing cigar from start to finish and will certainly be adding a few to my collection.

And that brings me to the end of todays review and you can pick up a Liga Privada Bauhaus online or in one of our stores. And here you can see the rest of the Drew Estate collection.

Until next time ‘happy smoking’