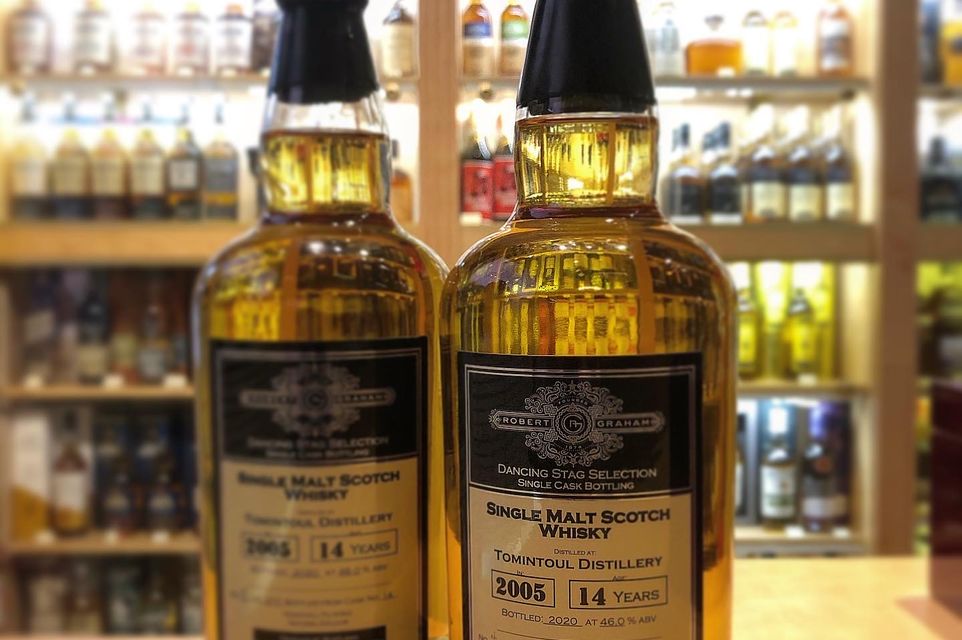 Relatively young as distilleries go, Tomintoul lies in the small village of Ballindalloch, in the Speyside region and was founded in 1964.  The distillery resides in one of the highest areas of Scotland, drawing water from a local spring which is considered to be exceptionally pure.  The water, coupled with the fresh air at this altitude is thought to make the spirit clean, smooth and easy-drinking.  So much so, that Tomintoul is marketed as ‘The Gentle Dram’.  Admittedly, having scoffed at such an assertion I have to agree that it is particularly silky…My mum even likes it as a non-whisky drinker!

Like many distilleries, Tomintoul’s spirit was initially was destined for blending, only a decade later being released as a single malt.  Even still, it wasn’t until after the year 2000, having been acquired by Angus Dundee Distillers that a solid range of different malts finally appeared.  Now, in addition to the numerous independently bottled releases there are a variety of official bottlings in the portfolio.  These include multiple age statement and non-age statement bottlings, different finishes and peated expressions such as Old Ballantruan, which stands alone and Peaty Tang, which has Tomintoul’s namesake.

Although known as ‘The Gentle Dram’, which could be more attributed to the non-finished age statement releases, Tomintoul has a wealth of different flavour profiles ranging from incredibly delicate to unctuously rich to salty and peaty.

Our Dancing Stag bottling is a single cask release, distilled in 2005.  It was held in a bourbon cask for 14 years until we bottled it this year (2020).  Personally, I think this is a marvellous whisky and fits many occasions.  Here are my tasting notes--

Light gold in colour.  Lovely rich aromas of butterscotch and honey make themselves known first.  These are followed by poached pear with Chantilly cream and honeysuckle on a warm summer’s day. Notes of elderflower, golden syrup and icing sugar come next.  On the palate, there are a collection of smooth flavours including chocolate milkshakes, cinder toffee, caramel bars and honeycomb chocolate.  The luscious and lengthy finish yields blueberries and cocoa powder with more dark fruits right at the back.

I usually always nose and taste a whisky a second time with the addition of water but on rare occasions it’s so tasty I don’t want to spoil it, and this was certainly one of those occasions!
However I would say that you’d be likely to open up some more floral and fruit notes upon dilution if you were to do so.

You can purchase your bottle of this outstanding Single Cask Tomintoul here!