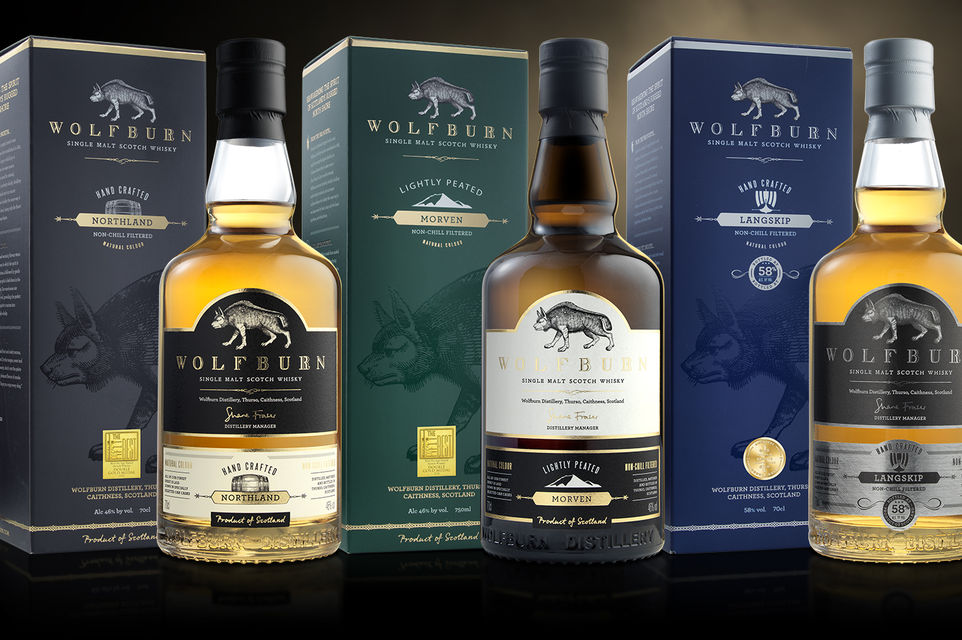 Of Wolfburn and Man

Situated in the Scottish town of Thurso, Caithness, Wolfburn whisky is the most northern distillery in the UK mainland. Now bottling four whiskies in their core range; the Northlander, the Aurora, Morven and the Langskip (they also bottle small numbers in their small-batch and their Kylver ranges). The Wolfburn Distillery has everything you want from a modern highland distillery, as they have continued to present unique and modern ideas which seem very in keeping with tradition and the heritage of the area.

Firstly let’s look at the area that helps make these whiskies so magical. As mentioned earlier, the Wolfburn Distillery is situated in the picturesque town of Thurso, Caithness; it is the most northern distillery on the mainland UK. The town itself dates back to Viking invasions and was a key gateway to the Viking homelands and the rest of the North Scotland area. As a continuation of this Viking heritage, let’s take a look at the amazing bottling of the Northlander. Being non-chill filtered matured in American oak barrels, the Northlander has an amazing warming quality to it. With a small trace of peat smoke in the background, on the nose, you will also find a generous helping of fruity citrus and cereal. Followed on the palate with nutty flavors in addition to honey and grapes, this finish is excellent.

Next up from this wonderful distillery we have the Aurora which, like the Northlander, is also bottled at 46% ABV and has non-chill filters. However, this expression also has the addition of a sherry cask used in the maturation process alongside ex-bourbon barrels. To make this whisky they also use a slightly longer fermentation time providing a sherry sweetness shining through on the nose, with autumn fruit and hints of dark chocolate and coffee also making an appearance. It truly has some delectable floral tones making their way to the front of the overtones of spice and vanilla. All this seems to lead to a warm soft finish, making a wonderful well rounded balanced whisky.

We move on to the cask strength member of the range, the Langskip (58%).  This also builds on the non-chill filtered and natural color ethos of Wolfburn Distillery. With light oak and green apples at the forefront on the nose, it also has a slight hint of raisins hiding in the background. As the raisins push ahead, making their way to the front of the palate, maple syrup and dark chocolate make their presence known leading to a wonderful caramel finish. It is easy to say that the strength of this whisky is matched only by its smoothness; it is a wonderful whisky.

So, finally, the last in the Wolfburn core range is the lightly peated edition called the Morven. This whisky is a true representation of both traditional values and modern trend-setting that the Wolfburn Distillery is a huge part of. The light peatiness comes from how the original distilling practices in the area occurred. It’s also bottled at 46% and is non-chill filtered. Once you get past the smoke on the nose, it hints of fruits and fresh air. The palate however has some gentle floral and malty notes ending with decadence of honey sweetness.

Let’s finish by mentioning that the Kylver series included limited cask runs. Wolfburn also bottles their small-batch range under the same name and they are all numbered.