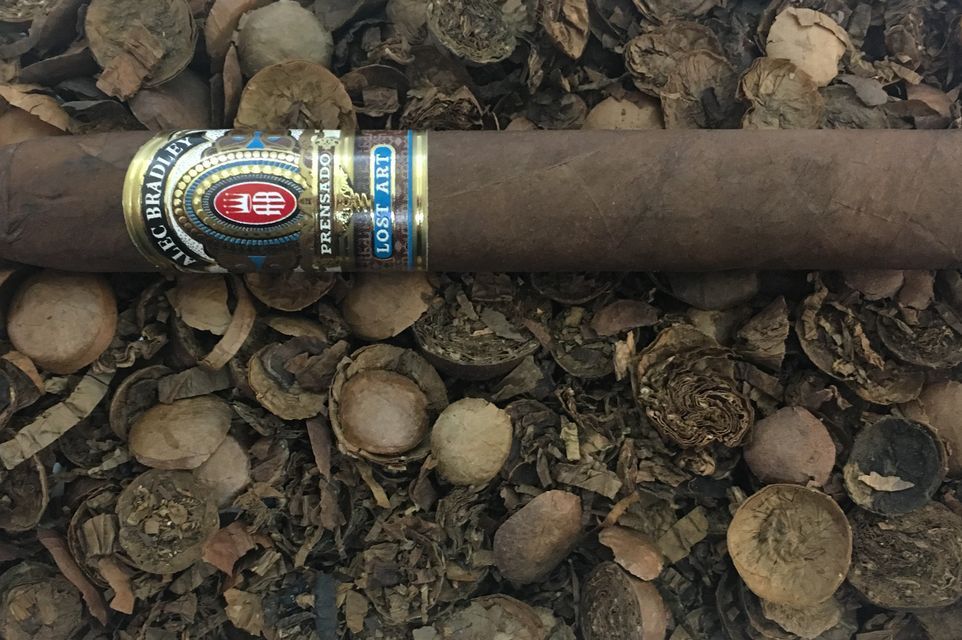 Raider of the Lost Art

Ladies and Gentleman, Cigar and Whisky lovers welcome to another one of my cigar reviews. Today I will be talking to you about our Alec Bradley Prensado Lost Art range which in my personal opinion is an homage to hand-rolled, high-quality craftsmanship.

The architect of these celebrated new world cigars, Alan Rubin, describes them with pride on his website as “traditionally rolled ‘entubado,’ with each filler leaf being rolled for perfect airflow, then semi-pressed and finished with a triple cap.”.
The fact that the cigars are rolled in this fashion makes for a higher density and longer-lasting cigar, but without sacrificing any of the draw.

Frankly, he has good reason to be proud. Not only was one of the Lost Art cigars ranked 9th best by Cigar Journal in their Cigar of the year listing for 2018, this medium to full-bodied cigar makes me fall in love with it every time i smoke one.

Ever since taking up a position at Robert Graham's Cambridge shop and lounge, I have spent a number of years intentionally broadening my palate and experimenting with stronger cigars, which are now my go-to compared to my younger years of smoking short filled cigars, thinking I was the bee's knees – I was amply rewarded with a memorable and highly enjoyable smoke.

The Lost Art torpedo is rolled at Alec Bradley's Honduran 'Raices Cubanas' factory, and its blend is comprised of Honduran and Nicaraguan fillers, two binders (one Nicaraguan and one Honduran) and dressed in a gorgeous  Honduran Corojo wrapper!! The size of the cigar is 6 ½ x 52, with a generous box press, and though its full strength comes on slowly, the final nicotine hit was enough to sink this battleship. But more on that to come...

The opening notes of this cigar were both marked and memorable, aided in part by the fact that it had a phenomenally easy draw. I quickly detected a flavour profile ranging from dark chocolate and dry roasted peanuts to chilli flakes and other spices. These flavours were expertly balanced without any one aspect dominating, which made for a very approachable start to the cigar.

The middle section of the stick retained its spiciness, which, if anything, became more pronounced. The cigar also had a bit of a kick to it as the nicotine began to assert itself. This was well rounded, however, by notes of sweetness and gingerbread. Indeed, it even had a doughy quality not unlike freshly baked bread - as one might expect, it was delicious!!

In its final stage, the flavour profile of the cigar became earthier, peppery and a pronounced black coffee or espresso note appeared. This was accompanied by a rush of nicotine near the end, which left me contentedly crumpled in a chair. I was slightly oblivious, therefore, to the final proceedings, but at no point was the quality of the Lost Art wasted on me. From my experience, I would simply recommend smoking one after you have eaten, not before!

Sadly, I did not have the pleasure of smoking this cigar with a glass of scotch.
If I had, however, I would have paired it with Arran 25, which has a Fruit cake with toasted almonds and cinnamon. The juicy zest of oranges and mandarins mellows perfectly with manuka honey, muscovado sugar, baked apricots and an interesting white pepper note that provides even more complexity. These could compliment the spice and pepper notes of the Lost Art torpedo. Furthermore, the next time I smoke this cigar – which I certainly intend to do so – I would like it to be on a warm summer afternoon, enjoying it post picnic, in a field or by a river where I can then stretch out afterward and have a glorious snooze.

I hope you get the chance to relax and enjoy a Lost Art Torpedo as much as I did.