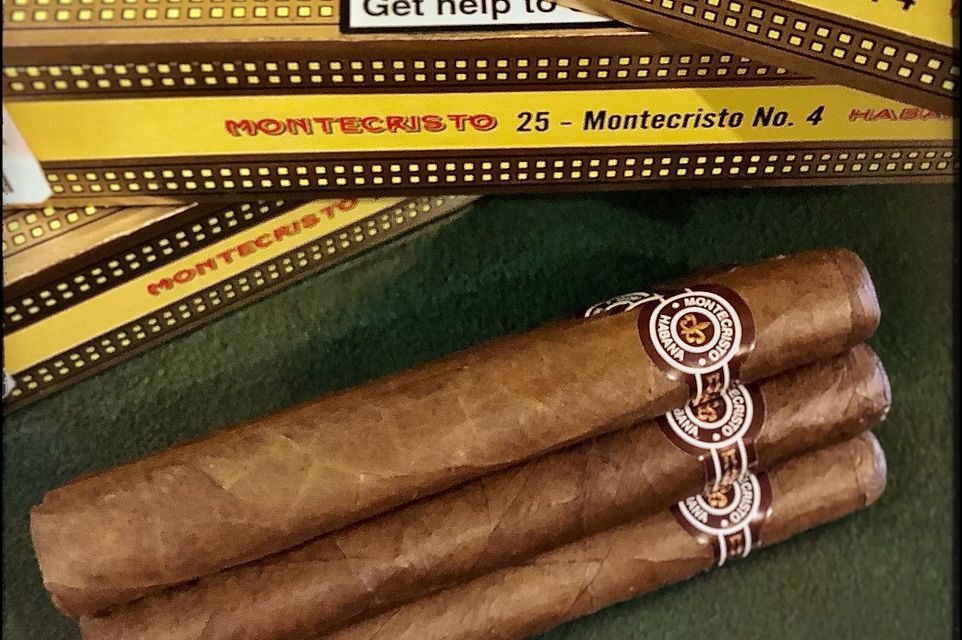 Start with the Classics - Montecristo No.4

Good afternoon ladies & gents and welcome to another Sunday Journal cigar and whisky review. I’m Ben, the newest member of the Robert Graham team, based out of our Edinburgh store and I am delighted to be bringing you my first pairing today.

My love of cigars began at the tender age of thirteen when we visited the Havana cigar factories while on a family trip to Cuba. The sights, sounds and smells were mesmerising to a young lad and stuck with me until finally at the age of eighteen I bought my first Cuban cigar to try. That cigar was the classic Montecristo No. 4 which well and truly cemented my love of fine tobacco. Now, twelve years on, I thought what better way to kick off my first review for Robert Graham than by revisiting the cigar that started my journey into the world of Habanos cigars?

The Montecristo cigar brand was first introduced in 1935 when Alonso Menendez bought over the once popular Cuban Particulares cigar factory. Menendez chose to rename the factory after Alexandre Dumas’s classic novel, The Count of Montecristo, after hearing that the book was incredibly popular with the cigar rollers of the time who enjoyed listening to it being read aloud by the factory Lector. The logo was designed specifically to pay homage to the swords mentioned within the novel. During the Cuban Revolution the Montecristo was nationalised and is still run by the Cuban government today.

Today, Montecristo cigars make up approximately a quarter of all Cuban cigars sold internationally which makes it the most popular Cuban brand in the world.

Montecristo cigars come in a variety of sizes, with the No. 2, No. 4 and No. 5 being some of the most popular. You can find these cigars, together with a variety of different vitolas on the Robert Graham website here. However, today we are focusing on the No. 4, a petit corona measuring in at 5 1/8 inches long by a 42 ring gauge. Until very recently the No. 4 was the biggest selling Cuban cigar on the planet (only recently being surpassed by the Partagas Series D No. 4). Picking up this cigar feels like running into an old friend that you haven’t seen for years. We may not have seen each other for a while but we immediately hit it off like old times.

This particular cigar has a darker wrapper than usual for a No. 4 with a colour somewhere between milk and dark chocolate. The wrapper is beautiful and smooth with a single prominent vein running down the length of the cigar. The cigar feels firm to the pinch with no soft spots noticeable. The draw is perfect with just the right amount resistance. The cold draw gives off aromas mild espresso with a musty barnyard smell.

This may be one of the highest produced cigars in the world but quantity certainly hasn’t detracted from quality. I’m immediately hit with flavours like a sweet, milky coffee in the first third together with a slight citrusy twang. The second third sees the coffee notes ramped up and is more reminiscent of a cappuccino with hints of creamy Lindt Lindor chocolate on the palate. The cocoa takes centre stage in the final third together with a mild cinnamon spice which pairs remarkably well with the sweet cocoa aspects. The burn was razor sharp for the entire length of the cigar with a nice solid white ash. This size of cigar is perfect for those who want a slightly faster smoke with the entire experience lasting 50 minutes from start to finish.

I had decided to pair the No. 4 with a Highland whisky from the Tullibardine distillery. The Tullibardine 225 has been finished in an ex sauternes cask from Chateau Suduiraut giving the whisky a lovely syrupy sweetness. The notes of caramel and orange peel play delightfully well with the coffee and chocolate flavours from the cigar. The two paired together was almost reminiscent of a Terrys Chocolate Orange which was captivating and I had to slow myself down from gulping down the whisky too quickly.

All in all this is was a great pairing that can be enjoyed by beginners and enthusiasts alike. There’s a reason the Montecristo No. 4 is so popular with cigar smokers.

Until next time, have a great weekend and happy smoking.